Wide angle lenses have tremendous creative potential. The way they affect perspective and line helps you make dynamic and exciting images. Yet, care is required to get the best out of them. It takes a little thought to avoid the messy compositions characteristic of photos taken with wide angle lenses by careless photographers. These tips will help you get creative with your wide-angle lenses.

1. Use your wide angle lens when it’s foggy or misty

Wide-angle lenses are useful for shooting in adverse weather conditions like mist and fog. You can move in close to your subject (in this case a fishing boat in Galicia, photographed with an 18mm lens on an APS-C camera – see above) and because you are fairly close, it is more or less unaffected by the fog.

The result is a nice contrast between the sharp foreground and the soft background. The fog also simplifies a potentially messy composition by obscuring whatever is in the distance.

If you shot a scene like this with a longer focal length, the boats would be much harder to see through the fog.

Both are valid techniques for photographing a foggy scene. It’s just a question of deciding which approach you’d like to take, then selecting the most appropriate lens.

As wide-angle lenses make objects that are not close to the camera look smaller there is a risk that the most interesting part of the landscape is pushed away into the distance, leaving the uninteresting parts of the scene to dominate the foreground.

To counter this you need foreground interest— something in the front third of the image that captures the eye.

It may help to mentally divide the frame into thirds. Each third requires something interesting to look at to pull the eye through the frame. Filling each region effectively also helps create a sense of depth.

You need some foreground interest in the first third, an interesting part of the landscape (such as trees or mountains) in the middle third and finally some interesting texture or color in the sky. Treat this as a guide, not a rule, and bear in mind the thirds don’t need to be of equal size.

The photo below (taken with an 18mm lens, APS-C) has an interesting foreground (jagged rocks), more rocks in the middle ground and an island with a distinct shape on the horizon. The eye naturally follows the rocks through the photo to the island and the distant cliffs. 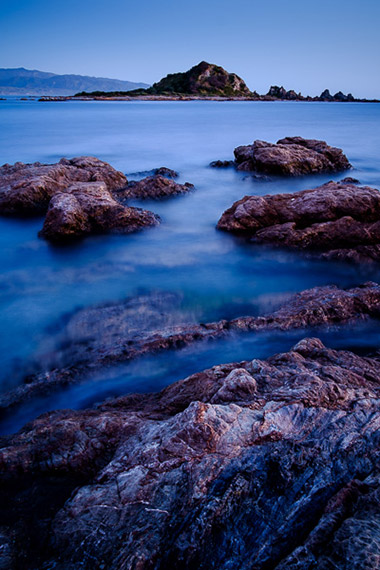 3. Take the “simplify your composition” challenge

With wide angle lenses it’s easy to include too much in the photo and end up with a cluttered composition. A good exercise, and a great way to improve your images, is to keep the composition as simple as possible.

That usually means getting in close to the subject and framing it in a way that keeps the background as uncluttered as you can. It won’t always work – depending on the scene there are times when it’s impossible to avoid a busy composition. But keep the principle in mind and apply it when you can.

For the photo below (taken with an 18mm lens, APS-C) I simplified the composition by using a slow shutter speed (240 seconds) to blur the movement of the sea. The sky is nearly empty of clouds, further simplifying the design.

This principle applies to all types of subject, not just landscape photography. Wide-angle lenses are really useful for taking landscape photos at night. Their wide angle-of-view is essential to capture the glory and scope of the stars and milky way. The shorter the focal length, the more sky you can capture. Ultra-wides can be really useful for this.

There are two ways to take photos of stars at night.

The first is to use a relatively fast shutter speed (usually around 20 seconds) to freeze the motion of the stars, so the camera records them as pinpricks of light.

A prime lens or wide-angle zoom with a maximum aperture of f2.8 or greater is useful as it gives you the option of opening the aperture to let more light in, allowing you to keep the ISO down.

The second way is to use longer exposures to capture the curved star trails created by the Earth’s rotation. Wide aperture lenses may also come in useful here, as keeping the ISO low both maximizes image quality and reduces long exposure noise.

This photo was taken with an 18mm lens at Lake Tekapo in New Zealand. 5. Photograph people in the landscape

Another effective technique is to include people in the photo. Getting close to a person with a wide-angle lens creates a strong focal point, and lets the landscape sweep away into the distance. The human figure creates a sense of scale. A small figure amongst a dramatic landscape, even more so.

There are two approaches to including human figures in the landscape.

The other is to use the person (or people) as human figures. Anonymous, but there to provide interest, a point of reference, a focal point or scale. In this case the figures may well be small in the frame, an effective way of showing the scale and drama of a particular landscape.

This portrait of a friend of mine uses the first approach. It was taken with a wide-angle zoom set to 25mm on a full-frame camera. Portrait in a Landscape

6. Use your wide angle lens to take photos of buildings

You can use wide-angle lenses to take photos of buildings, both from the outside and the inside.

Inside, a wide-angle lens might be a necessity and the only way to include a significant part of a room or the inside of a large structure like a church or cathedral.

This holds true outside as well, especially if you are close to the building. Depending on its size, you will probably only be able to include the building in its entirety from a distance.

In the photo below (taken with an 18mm lens, APS-C) the tower, positioned at one of the corners of the wall surrounding Beijing’s Forbidden City, is shown in its environment. The use of a wide-angle lens includes enough of the scene to create a sense of space and serenity.

7. Use your wide angle lens to emphasize line and shape

Exploit the exaggerated perspective of wide angle lenses whenever you can. Look for lines that lead towards the subject or the horizon. They add depth by taking the eye through the image from the foreground to the horizon, and create a sense of motion or flow through the photo.

Wide-angle lenses emphasize and exaggerate line. You can use this to your advantage by placing them in a way that leads the eye into and through the image rather than out of it. This is where the fun element of wide-angles comes in – a simple change in position can alter the composition, and the way that lines run into and through it, dramatically. Experiment with point-of-view and line and see what happens.

Wide-angle lenses can also emphasize shape, especially with photos of man-made objects like buildings. Two things drew me to the scene in the photo below (taken with a 14mm lens, APS-C). The first was the dramatic shape of the house. The second was the corresponding shapes made by the road markings. Both are emphasized by the black and white conversion and high contrast treatment. Wide angle lenses are idea for environmental portraiture and this is an approach often adopted by documentary photographers and photojournalists.

A good approach for this type of photography is use a moderate wide angle lens. If your lens is too wide you may get too close and make your sitter uncomfortable. Try and keep your focal lengths between 24 and 35mm (full-frame), 15 and 22mm (APS-C) or 12 and 17mm (Micro four-thirds). Avoid placing your model’s head too close to the edge of the frame, especially the corners, where it may be distorted.

I made the portrait below (taken with an 18mm lens, APS-C) by moving in close to my friend while she played her guitar. With wide angle lenses you need to get physically close to take photos where your model fills a large part of the frame. This requires a good relationship with your model. Once she trust you she will let you get close enough to use a wide angle lens. Getting close creates a sense of intimacy and involvement in the scene that isn’t present with longer focal lengths and is usually worth the effort.

About the Author:
Andrew S Gibson is a professional photographer based in New Zealand. He has taken photographs in 60 countries now as a Technical Editor for EOS magazine. He produced a Mastering Lenses guide for photographers.