Recording first-person action just got better. Today GoPro announced the release of several powerful new products, including the much anticipated GoPro HERO4 Black. CEO Nick Woodman shares some of the camera highlights in the video below:

“Each frame of 4K30 video is an 8.3 megapixel image… You can effectively shoot photo and video at the same time with the Black edition.”

According to GoPro’s announcement, the new products and features include the following: 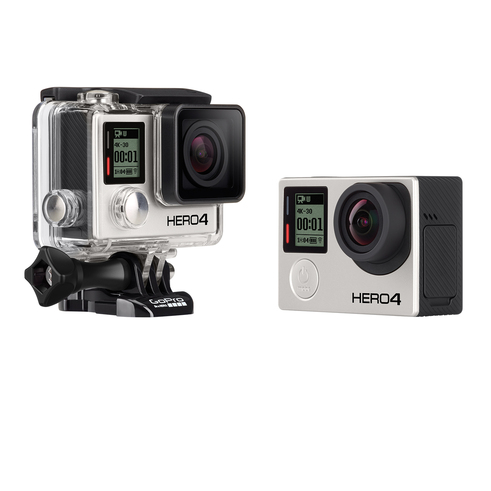 The flagship HERO4 Black builds upon GoPro’s Emmy® Award-winning technology to deliver the next level of GoPro image quality, versatility and performance:

“A common pain-point is deciding between capturing video or photos of an experience,” remarked Woodman. “Each frame of4K30 video is similar to an 8.3 megapixel photo. The result is that users can simultaneously capture eye-popping 4K30 video and impressive 8.3 megapixel photo-like video stills at 30 frames per second when using HERO4 Black. It’s one of the many wild capabilities of this impressive new device.”

GoPro is also proud to debut HERO, the perfect entry-level GoPro. Designed with simplicity in mind and built directly into a rugged, waterproof housing, HERO captures high-quality 1080p video at 30fps and 720p video at 60fps. HERO captures the same immersive, eye-popping footage that’s made GoPro one of the best-selling cameras in the world—all in a simplified package that’s accessible to everyone with an MSRP of $129.

October 5th also marks the availability of these new GoPro mounts and accessories:

GoPro Studio makes it easy to import GoPro footage from your camera to your computer to create professional-quality videos. GoPro Studio features GoPro Edit Templates, template versions of some of GoPro’s most popular videos. All you have to do is replace the original GoPro video clips with your own favorite clips and the editing style that has made GoPro famous becomes your own. GoPro Studio now supports the HERO4’s HiLight Tag feature, making it easy for GoPro Studio to identify your videos’ best moments thereby allowing for faster and more convenient editing. Also new to GoPro Studio is Flux™, a powerful ultra slow motion and speed ramping tool that enables the dramatic time-shifting effects GoPro has become so well known for. Want to highlight a particularly awesome moment in one of your edits? Flux that thing and share it with the world.

The GoPro App for mobile not only gives you instant access to the GoPro Channel and all of the incredible content that has made it the number one brand channel on YouTube, it also gives you full control of HERO4 Black and Silver and allows for quick and easy changes to any mode or setting. Expanded GoPro App support for HERO4 also includes support for HiLight Tagging while recording, as well as searching for tags during playback. As always, the GoPro App also allows for shot preview, playback and sharing of your favorite photos and videos via email, text, Facebook, Twitter and more.