I hope you enjoy this video, “The Moon in Motion,” with footage of the “Great American Eclipse” captured from locations in Idaho and looking over the Tetons on August 21, 2017.

It’s best viewed with the lights down and the music up on the biggest screen you have. Music is by my talented friend, cellist and composer Kristin Rule.

Outside a busy job, it has taken me nearly two years since this international expedition to develop and apply the specialized eclipse image processing and video editing techniques required to create this video.

The video features footage from seven out of 12 cameras I had running that day. Eight cameras were on site at South Menan Butte, Idaho. The other four were at remote locations established in the days leading up to the eclipse: at Table Mountain, Wyoming, overlooking the Tetons, and in the foothils of the Beaverhead Range (south of Blue Dome) looking over the Snake River Plain of Idaho.

I was using at least 185 kg (400 pounds) of telescopes, mounts and cameras. Four cameras were hired from Lens Rentals plus on one on loan from Canon USA via my co-tour guide Glenn Tamblingson. The rest were shipped from or travelled with me from Australia.

Here’s the full list of cameras at each of the four locations I established:

The cameras used with telescopes were automated with Eclipse Maestro on Mac (#1) and Eclipse Orchestrator on PC (#2). Most other cameras were operated with timer remotes, with cameras at the remote locations below setup and counting down to the moment of eclipse automatically two to three days in advance.

The images are annoted below with some features to note in the video: Partial eclipse: The moon moves across active sunspot groups which were unexpected for this eclipse nearing solar minimum. Snake River Plain, Idaho: Note the shadow moving rapidly across the hazy cloud band, with Venus visible high in the sky above the sun. On location: My Takahashi FS-102 telescope capturing the eclipse.

The red lights on the mount and the camera indicate how dark it gets during totality. There’s a thermometer hanging on the telescope that I was using as a guide while adjusting the focus as the tube temperature dropped during the eclipse (particularly due to radiative heat loss to a cold sky). You can also see the filter on the telescope removed as totality starts. 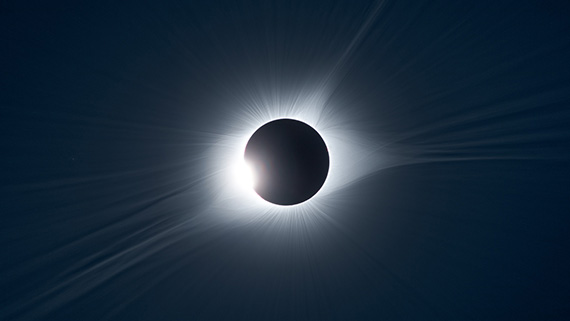 Widefield corona: The diamond ring at second contact (start of total eclipse) gives way to a wide view of coronal streamers in the sun’s atmosphere. The bright star Regulus appears in the frame also. Eclipse over the Tetons: the unique view from Table Mountain

I hiked the 11,100-foot summit of Table Mountain three days before the eclipse to plant an automated camera hidden down the east ridge, with the highly uncertain hope of capturing footage on eclipse day. The Canon 5D Mark IV reliably churned away at more than three full size RAW files per second for six minutes covering totality and a few minutes either side. But on the hike back up on the day after the eclipse, I learned from other hikers that my camera had fallen over (in the wind) and therefore that the whole affair had likely been in vain. Read more about how lucky I am to have captured this unique sequence. Note the shadow racing away across the landscape at left of the Teton’s range. Corona close-up (above): Baily’s beads, as the edge of the sun breaks up into beads through hills and mountains on the rough edge of the moon, give way to a high-resolution view of the solar corona with coronal loops, helmet streamers and polar plumes. If you watch carefully during totality you can see the motion of the moon from right to left against the corona, particularly so as it reveals the giant red prominence on the right side, until the sun reappears from behind the moon, bringing an end to an eclipse for which I had been anticipating, planning and rehearsing for more than three years.

These high-resolution views of the solar corona have been produced using PixInsight and a Larson-Sekanina filter. Video editing with Adobe After Effects and Premiere Pro to combine the rapid sequences of images with the background view of the solar corona.