Shooting a model is considered a staple for many—if not most—photographers. Models are photographed for portraits, advertising, stock, etc. Most of us, especially when starting out, use family and friends as our models. It’s a great way to gain experience and practice. But, at some point, you may want to photograph someone with modeling experience.

Finding a model for your first model photo shoot is easier than you might think. You can hire one, obviously. But, when you’re just starting out, you may not have a lot of resources to hire a model. There’s a solution to that, and it works well for both you and the model.

Look for models that are just starting out. For them, there is something that they need more than money: photos.

In order for models to get paying work, they have to be able to show work they’ve done in the past. In other words, they need a strong portfolio. Sound familiar? It should. Because you, as a photographer, also need a strong portfolio to show if you plan on getting paying jobs. So, by finding a model that is building their portfolio, you can offer a trade-for-prints deal, or TFP for short. Even though it’s called trade-for-prints, you don’t actually have to provide prints, unless that’s part of the deal you make. Many just provide the photos to the model digitally.

For my first model photo shoot, this worked out perfectly. I went on Craigslist and checked under the “talent” section. I was actually looking for models I could offer a TFP deal to, but I didn’t have to. There was an ad posted by a model who was looking for a photographer to do a TFP deal! I answered the ad, and after a few emails discussing specifics, we had a date and time set up for the shoot.

It’s a little awkward if you think about it. You get to the location and you’re about to start shooting photos of a person that you don’t know. You, as the photographer, are responsible for directing the model and getting the best shots you can, both for you and your model. There will be lots of things racing through your head, hoping you’re getting the job done right. But remember, if you appear nervous or tense, it will make your model nervous and tense. If that happens, the photos are going to suffer.

The best thing to do is just take a little time at first to talk. My model (Chrissy) brought a friend with her (Ben), which helped a lot. By being there, he helped her with any nerves she may have had. (He also helped me with my equipment. He carried my camera bag and tripod. Ben, if you’re reading this, you rock!) 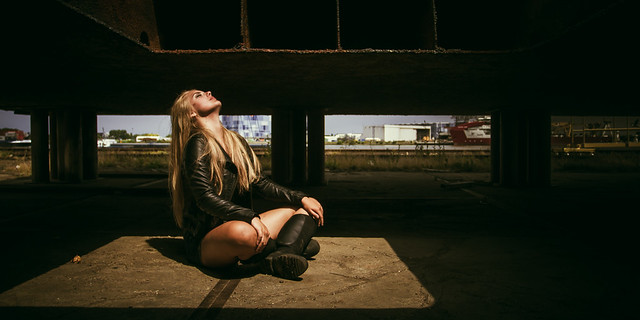 Take a few test shots just to get some shots in the bag, so to speak. This does wonders for helping everyone relax and really get loosened up. Once your model feels comfortable, they’re able to do what they do. Chrissy made things so easy. That’s one of the biggest differences between shooting friends and family and shooting someone with modeling experience. Models know how to pose and give you a range of emotion. But, they also know how to take direction. Don’t rely on them alone. The model is posing, but they are relying on you, as the photographer, to be their eyes. They can’t see what the shot looks like. Check your viewfinder. Look for ways to improve. After your model has given you several poses, give them some direction on a few more.

Also, don’t be afraid to try things. If you’re shooting digital, shots don’t cost you anything but memory space. There were several shots I took where I said out loud, “I’m not sure if this will work, but let’s try it.” Sometimes it didn’t work. But, there were a few times it worked great! So, don’t be afraid to try things. Especially if it’s your first model photo shoot.

When working with a model, you don’t want to waste time. That doesn’t mean you need to rush. Take your time and do a good job. But, you don’t want to be playing with your camera, trying to get it to do something you aren’t sure how to do. Have an idea in your head of how you want to shoot the model. Are the shots going to be portraits? Plan on shooting with a big aperture to get soft backgrounds. Are the shots going to be more action oriented, like sports or dance? Plan on shooting with a high enough shutter speed to catch the action. You need to have in mind the kind of shots you’re going to take so you aren’t wasting time trying different settings. This doesn’t mean you can’t experiment with different shots and settings. Just have those ideas in mind so you can quickly set up and shoot.

By knowing the kind of shots you’re going to take, you’ll know what you need to have with you. For this photo shoot, I knew it would be bright, especially knowing the time of day we would start shooting. So, I made sure I had my lens shade with me. As it turns out, I didn’t need it. But, it’s better to have something you don’t need than to need something you don’t have.

For my first model photo shoot, we went to the beach. Dauphin Island, Alabama has a great beach with several locations to take advantage of. I really like the dock there. It’s kind of weird because it doesn’t go out far enough to reach the water. I’m not sure what the dock was meant for if it doesn’t reach the water, but I know it’s great for taking photos! You can shoot on the top of the dock. On top, there are several places in wide open sun, as well as covered areas for shade. There are steps you can shoot on that take you to the bottom of the dock. At the bottom, you can go under the dock and get some great shots using the shade and the pillars.

The point is, I knew my location. I had been there before, and I already had shots in my mind that I wanted to get. Nothing wastes more time than endlessly walking around a location, trying to find a good place to shoot. So, have your location in mind. I recommend getting there 30 minutes early so you can look around and get some more ideas of the shots you can take.

Some other important things to keep in mind about location are the conditions. You probably won’t be able to plan for this until the day of the shoot. Check the weather to have an idea of what you’ll be shooting in. You can only plan this so much. My first model photo shoot was in bright sun, and we started shooting at 2:00 pm. Not the best time to shoot. The lighting is very harsh. But, you can’t always control when you shoot. You’ll have to shoot when your model can. So, you need to have in mind ways to shoot around the weather and lighting conditions.

One thing that did catch me off guard was the wind. It was incredibly windy during the shoot. There were some shots that the wind worked to our advantage though.

You want to take lots of shots. Especially if it’s your first model photo shoot. This gives you a lot of photos to pick through when done. You never know when you might snap a photo that captures the perfect expression or glance. When going through the photos later, you’ll have to decide which ones to keep and which ones to get rid of. By shooting many photos, you’ll have several that are very similar that you can select the best from. For example, the model would give me a certain pose, and I would snap 3 or 4 photos in a quick burst. Each of the photos would be slightly different. These subtle changes make a huge difference in selecting the best photos.

My first model photo shoot was a very positive and rewarding experience. It helped me get a feel for what shooting a model on location is like. It helped me understand how important communication between the photographer and model is. It gave me an idea of what kind of work is involved after the shoot. Shooting photos is only part of it. You have to go through the hundreds of shots and try to narrow them down to the ones you want to keep.

On this particular shoot, I shot around 350 photos in a two hour span. I narrowed them down to what I felt were the top 50 shots. I made sure there was a variety of photos that both the model and I could use in our portfolios. Another reason to narrow them down is because you don’t want to have to post process 350 photos in Photoshop! Don’t waste time editing photos you aren’t going to keep. Select the best ones and go from there. Dump the rest. Remember, the model will be showing your work in their portfolio. Don’t give them subpar images. It reflects on you! Only give them your best work to show.

On the DVD I gave to the model, I had a folder with my top 50 shots in high resolution. These are the files Chrissy can use to make prints from if she chooses. I also included a “Copyright Release Form” that gives her the right to print the photos for personal, non-commercial use. This is required because some places won’t allow the model to print the shots without signed approval from the photographer. I also included a folder of the 50 photos in low resolution form. These are optimized for online use on places like Facebook. On the low res photos, I also included a small watermark in the bottom right-hand corner of each photo. This watermark has my website address. So, when the model posts the photos online, I get a little free advertising. If you do this, make sure the watermark is readable, but not intrusive.

One of the greatest rewards was seeing Chrissy light up when she saw the photos for the first time. I met her and Ben at a bookstore and we looked at the photos on her laptop. She was smiling ear to ear and kept saying how happy she was with the photos. It’s a great feeling when you collaborate with a model on a photo shoot, deliver the photos, and walk away knowing that the model was beyond satisfied with your work. It builds your confidence as a photographer.

So I can say that my first model photo shoot was a very positive experience. Follow these tips, and yours can be too!

About the Author:
Jason Pryor writes for jasonpryorphotography.com. You can find more info about him, view his work, and learn more about improving your photography by visiting his site.