How to Use Remote Flash Triggers in Photography

As photographers we spend a lot of time playing with light. Light is our medium, we talk about its color, its quality, its size, and its softness. And a lot of our talk is about how to change it. One of the first things that a novice photographer tires of and wants to change is the boring, flat light that their camera flash produces. While there are any number of devices that can filter or shape light one of the biggest groups of light changers are the remote flash triggers.

At the most basic level one of the fastest ways to change flash light from flat and boring is to move its position. If instead of having our flash shoot a head-on beam of light into the subjects face what would happen if we moved the flash up and to the right or left of the subject? The answer is that we get better and more flattering light. However once the flash is moved off of the top of our camera it loses the vital connections required to make it fire. This is where remote flash triggers come to play.

While there are dozens of varieties of flash triggers available they all have one chief purpose: to cause the flash to fire at the precise moment that the camera’s shutter is open. This process is what we call “flash synch” and it has been around for about as long as cameras themselves.

Corded flash triggers attach to the top of the camera and have an electrical communications cord of from six inches to over 30 feet which on its other end connects to the flash through either a shoe or a plug of some sort. A flash cord is pretty much error free—if it works it’s good, if it doesn’t work throw it out and get a new one. However there is now a cord draped across the floor and the photographer’s movements are limited by how movable this cord is in its environment.

Here is an important detail to remember: while a flash cord may limit movement or present a slight trip hazard, with the right match of camera, cord, and flash full TTL automatic exposure is maintained. With only a very few exceptions, remote flash triggers don’t offer automatic exposure.

Another variation on the original slave sensor is a sensor system built around infrared (IR) controls. Why would anyone go to the expense of using an IR control? The photographer wants to trip one or more slave flash units without adding any flash light from the camera’s position. In the previous flash to flash slave setup the camera mounted flash is a part of the exposure and if the photographer is working handheld and change in position changes the main light in the exposure. With an IR controller rather than a master flash on the camera the photographer can roam at will.

Slave sensor flash triggers work pretty well in a studio or living room where there isn’t a lot of distance or interference. But what is the answer for the photographer who wants to position a flash out of sight? Electric eye sensors require line of sight to the master flash or IR controller or they won’t fire. So much for illuminating a back wall with a flash hidden behind a sofa, or using multiple flashes to fill every dark corner of a church.

To solve this need we take the next step up the ladder and use a radio frequency flash trigger. All the setup is the same with a radio trigger, a controller attached to the camera and a sensor attached to each slave flash. However with radio we now have a system for just about any need. From one camera position it is possible to fire as many flash units as desired at ranges of from 100 to 1,600 feet. Around corners, behind couches, in every dark spot of a church it is possible to add flash light with a radio remote flash trigger.

If you are attracted to remote flash triggers I suggest going directly to the radio type triggers. They are more versatile and may be used in the studio, in a gym or in a church. There is more cost up front but the photographer won’t need to repurchase and upgrade later.

Anytime that the flash is not physically attached to the camera the photographer will need to be shooting in Manual exposure mode. Without the multiple connections that are made between the flash foot and the camera hotshoe automatic exposure is impossible – with two pricey exceptions.

There are two different systems from three manufacturers that permit in-camera exposure control (Program Mode, Aperture Priority Mode, or Manual Mode) of a flash that has no direct connection to the camera. One type uses optical means as seen in the original Nikon CLS Multi Flash System.

CLS used either a camera mounted flash or the built-in flash as a controller that would fire remote flashes while maintaining automatic exposure control over those flashes. By sending out coded 1/10,000 second emissions from the camera flash the remote flashes were told both when to fire and just how much. All of the flashes used must support the CLS system which pretty much confines flash purchase choice to the Nikon brand.

Canon uses a similar concept but the controller is an infrared emitter, the STE-2, rather than a camera flash. Nikon also offers an IR emitter option for its CLS system, the SU-800. Flash controlled or IR controlled these optical trigger systems have an operational range of under 45 feet. 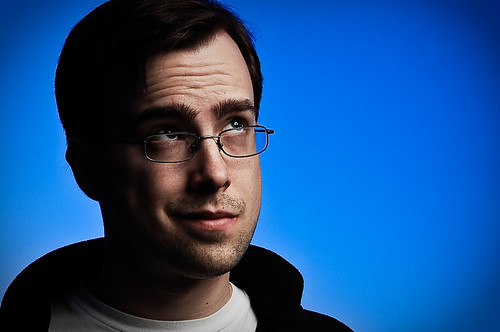 “Ever the Optimist” captured by Ryan Hyde

In conclusion: Remote flash triggers are an important accessory for those looking to improve their flash photography. Optical trigger systems such as those that are flash based or infrared based work well in studios, living rooms, and other like-sized spaces. Radio trigger systems are more expensive but offer versatility such as the ability to fire a flash that isn’t in line of sight. For the majority of remote flash trigger systems, manual exposure mode is required, a few select systems can add TTL auto-exposure but at a premium price.

About the Author
Stu Eddins is blogger, instructor, merchandiser, and is generally in charge of a lot of things for Porter’s Digital Cameras and Imaging. Visit their site at www.porters.com. Years of experience over the counter and in classrooms have turned Stu into an evangelist for image preservation, capturing and sharing memories, and helping people understand digital cameras, digital camera lenses.

4 responses to “How to Use Remote Flash Triggers in Photography”