Has anyone ever photobombed you? How about an animal? This traveler with a selfie stick stopped to snap a picture but had a parrot land on it! Without hesitation, he snapped this awesome image to remember the moment forever. You can see the surprise on both faces shown as the parrot disrupts the snowy landscape shot: 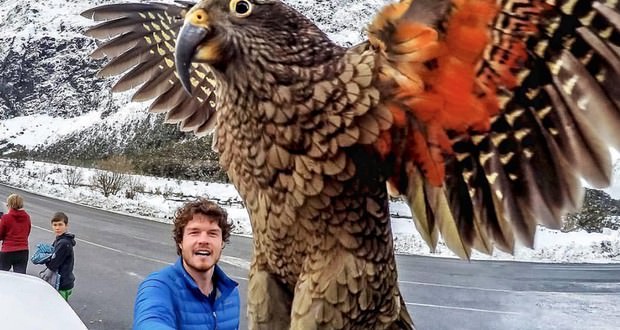 A Kea drops in for a selfie. (Via Imgur. Click image to see full size.)

Instagram photographer Allan Dixon was interrupted by this mountainous New Zealand parrot called a kea. Keas are well known in New Zealand as pesky birds that will pick objects apart, including backpacks, skis, boots, and even cars. They are commonly found near ski areas where the parrots patrol for food scraps from skiers and snowboarders. They have been observed and documented using tools and solving puzzles to get what they want. Now, you could say they have been shown posing for a photo with a human as well. Smart birds!