Composition is the heart of the photo. Composition leads to the work of art that starts from inspiration. Inspiration begins when you disconnect with the interior struggles of everyday life and free the spirit to experience the world around you. Truly being in the moment and experiencing nature links you with everything around you.

“The Wave” rock formation in Utah captured by Richard Schneider

It may sound like meditation, but awareness of your surroundings without interference of outside thoughts clears the mind and sharpens your senses. Images appear where you did not see them before. The elements begin to align and art emerges.

Joseph Cornell, in his book “Listening to Nature How to Deepen Your Awareness of Nature,” suggested this exercise:

The Native Americans called this “silent hunting.” Nature will speak to you, but you must be quiet. Nature speaks softly. If you are patient, nature will reveal herself to you. And incredible images will appear.

There are many times that I have entered the woods with camera in hand and not found anything that I wanted to photograph. It could be that I was not ready or nature did not want to reveal herself. Perhaps she didn’t feel photogenic that day. Other days, scenes appear as if by magic. So don’t be disappointed if you can’t find anything to shoot on any given day. Use that time to scout the area for future opportunities and revel in the fact that you have a chance to be outdoors.

Take this as an opportunity to plan for future shots. At these times think, “What if the light was coming from a different direction?” Coming back in the early morning or late afternoon may produce a better image. Seasons change the landscape. Perhaps shooting in the fall, with the foliage in brilliant colors, or winter with a fresh layer of snow would create the photo that you desire.

Don’t rush yourself when seeking that image. Time with nature is a joy all by itself. If you don’t find anything to shoot, the sheer pleasure of being one with the outdoors is worth the experience.

I would like to cover two elements, that when incorporated into an image, create a sense of depth. Depth, in any work of art, crafts an illusion. It creates an illusion that the two dimensional becomes three dimensional.

Any photo that centers on the main subject with the exclusion of its surroundings becomes a static shot of that subject. It becomes a snapshot. Our aim our goal is to create art.

For example, a lighthouse when photographed in the center of the photo, is a snapshot. Certain elements from the surroundings should be included in the photo to give a feel for the size of the lighthouse, or produce an emotion about the lighthouse. The same concept applies to mountains, waterfalls, sunsets and sunrises.

Two techniques we will cover in this article are framing and foreground.

Framing, when done correctly, helps define the main subject. Framing gives the photograph perspective. It highlights the subject giving the viewer a new or more interesting way of looking at the subject. Perhaps the subject has been photographed a thousand times, but by properly framing the shot, the viewer can see the image through with a different prospective. This unique view produces the “OHH WOW” factor.

When a subject touches your soul and screams, “Photograph me!” Do it! But after the initial rush, step back and look around. Is there something that could be added to the photo that would frame the subject in a unique fashion? An archway, gate or tree branch that would add to the finished image and would frame the main subject. 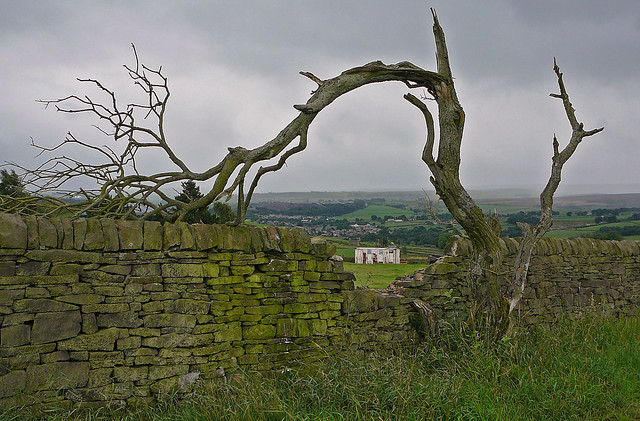 It may take a little exploring, but a framing opportunity exists somewhere and you just have to ferret it out. In most instances, the photographers that have shot this scene prior to you probably didn’t bother to take the time to find this distinctive point of view. Be prepared to spend a little time in search of the framing element that makes your shot. When you find it, it will be worth the effort.

A second technique useful in creating successful images is including the foreground in the image. The addition of the foreground adds depth to the photo by giving a point of reference to your subject. The foreground leads the eye to the main subject.

Often including the foreground may mean that you will have to lower your tripod closer to the ground. If not using a tripod, then you may want to kneel or lie down on the ground. By simply lowering the camera, more of the foreground will enter into the picture.

When including more of the foreground, I would also suggest using a smaller aperture. The smaller aperture increases the clarity of the image throughout the image, adding depth of field. Many DSLR cameras have a preview button that allows the photographer an opportunity to see what the finished image will look like prior to pushing the shutter release.

It’s best to have a checklist prior to shooting, and be sure to use it.

“Inspiration for my art is found in the natural world. Being in the midst of nature is a tranquil and revitalizing experience. Early morning and late afternoon light paints the landscape with a soft glow, fog and mist create an air of mystery. Sunbeams streaming through the tree branches craft portals of mystic radiance. Reflections on lakes and streams produce a picturesque spectacle. Using the camera as a paintbrush, I attempt to recreate these visual sensations and share them with others. My mission is to share a love of the earth and a desire to protect it.”